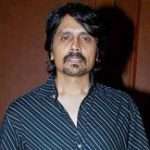 Film maker Nagesh Kukunoor was born on 30 March 1967 in Hyderabad. He developed interest in films since from his childhood days, he loved watching English, Telugu, Hindi films. He completed his engineering degree at Osmania University in Hyderabad, he specialized on Chemical Engineering. He went to U.S to do masters at Georgia Institute of Technology. After completion of his education he worked as an Environmental Consultant in Texas. While working in Atlanta he studied film making at Warehouse Actor’s Theater.

He entered the films with Hyderabad Blues in 1998 Nagesh Kukunoor, Rajshri Nair and Elahe Hiptoola, the film was a huge commercial and critical success. He gained recognition and respect among Indian film makers. He subsequently worked for numerous successful films like Iqbal starring Naseeruddin Shah, Shreyas Talpade and Girish Karnad, among other films.

He was born to KS Naidu and Kusuma Sudarshan.