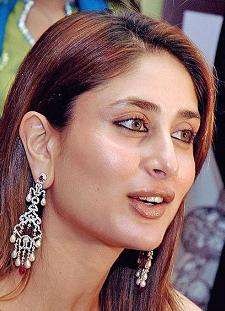 *    Her father Randhir Kapoor is a noted Bollywood actor, director and film producer.

*    Her mother Babita is an actress who appeared in movies like Dus Lakh, Raaz, Haseena Maan Jayegi, Farz, Aulad etc but after her marriage with Randhir Kapoor in 1971 she gave up acting and remained as a house maker.

*    Kareena has an elder sister Karisma Kapoor who entered the Bollywood films a decade before Kareena made her debut.

*    Karina is granddaughter of Bollywood legend Raj Kapoor. She is niece of Rishi Kapoor.

*    She did her schooling at ‘Jamnabai Narsee School’ in Mumbai, ‘Welham Girls School’ in Dehradun and ‘Mithibai College’ in Mumbai.

*    She also studied microcomputers at ‘Harvard University’ in USA, having interest in law she joined ‘Government Law College’ in Churchgate but left it in middle.

*    Though she was born in filmy family her father was against his daughters entering the films, there were conflicts between Kapoor parents and it led Babita to leave Randhir Kapoor. Babita raised the daughters on her own doing several odd jobs. Babita encouraged her daughters’ dream of acting career and played a vital role in shaping the careers of both daughters, Karisma made her debut in 1991 with Prem Qaidi alongside Harish Kumar. Her parents reconciled in 2007 after a gap of 20 years.

*    She participated in “HELP! Telethon Concert” to raise money for victims of ‘2004 Indian Ocean earthquake’. She also worked for NDTV show ‘Jai Jawan’, UNESCO campaign ‘1GOAL Education for All’ etc.

*    She started dating Shahid Kapoor during the filming of Fida in 2004 and there were MMS all over the internet which claim to be shot at their private lick lock, the couple broke up after Jab We Met in 2007 and he stated that they are still good friends.

“Acting is in my blood. I have that passion in me. Whatever I do, I will give my 100 percent to it. I am of the belief that an actor should know to switch from one role to another effortlessly, like Aamir Khan and Saif do.”

“I was with Saif for five and half years before getting married. I had a live-in relationship with him and we were quite open about this fact. Many people want to hide their boyfriends in public. I didn’t. I have tried and tested the live-in relationship formula and now I can personally endorse it for modern Indian couples. And live-ins are a reality in modern India. I am a modern woman and I am glad I could live up to what I believe in.”

“Total faith and complete belief in myself is my attitude towards life, films and virtually everything else. I am all about doing what I feel is right. It is not easy to pin me down as I can be a bundle of contradictions”

“I like candle light dinners but in the snow, not by the beach!”

“The fact is that over the years I have learnt to balance the whole diplomacy bit. I learnt that from Karishma, because initially I was very blunt while talking. As time went by, Karishma used to tell me, ‘You have to change, you have to change’. So I said, ‘Let’s not change completely, but balance it out.'”