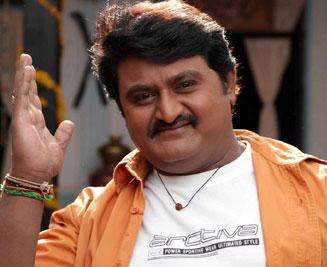 Komal Kumar was born on 4th July in Mayasandra, Tumkur District, Karnataka. He is a law graduate and after completion of his education in Ooty, Komal entered the films as an actor.

He is married to Anasooya who produced one of his film “Kal Manja”.

Kannada actor Jaggesh is his elder brother. Actors Yethiraj and Gururaj are his nephews, production designer N. Srinivas is his brother-in-law.

Komal made his acting debut in 2000 with Kannada film ‘Khiladi’ but he never gained popularity until 2008. Until 2000, he used to appear in minor supporting roles and so far he worked in more than 200 Kannada films.

His debut film in a lead role was ‘Mr. Garagasa’ in 2008, the film was directed by Dinesh Baboo. He later appeared in noted films like ‘Chamkayisi Chindi Udaisi’ ‘Maryada Ramanna’ ‘Kal Manja’ etc.

In 2012, he gained popularity with his first ever blockbuster film “Govindaya Namaha”, the song “Pyarge Aagbittaite became viral and people went crazy about the song. The song was one among the super hit songs of the year in Kannada cinema industry.

“There have been instances where I have been misled. The story narrated to me at times would lack correlation with the end product! See, I have never done films for money. Quality is what matters to me. At the end of the day it gives me a high to see audience whistle and clap for me. I will strive to make good cinema for that purpose.”

“I considered doing lead roles as I wanted to bring out different emotions in the actor in me. It’s one thing to make people laugh, but what stays in the minds of people are other emotions. For instance, take the role I played in Tavarige Baa Tangi. I remember people crying when they saw me crying on screen.”