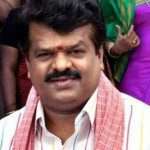 *     Tennis Krishna is a well known comedian who is prominently working in Kannada industry, he is popularly known for his mannerisms and voice.

*    Tennis Krishna started his career with theater works and later moved to films.

*    So far Tennis Krishna acted in more than 350 kannada films.

*    His popular co-star is Rekha Das with whom he worked for 99 Kannada movies.

*    Before starting his film career he was working as a Tennis coach & hence he preferred to use the stage name as “Tennis Krishna” as there was Honnavalli Krishna to be confused with.