One of the most versatile actor in Bollywood, the action king kiladi has an interesting love story in his real life. Akshay Kumar who is also well known as ladies man broke few Bollywood hearts. This Bollywood Hunk boldly accepted many of his relationships with actresses.

Akshay Kumar started his career with a humble note. Whereas his love of life Twinkle Khanna was born with silver spoon. Twinkle Khanna was born in filmy family of super star Rajesh Khanna. After returning from Bangkok he struggled hard to settle in Mumbai. His filmy career took off very impressively after his Kiladi series. Akshay Kumar fell in love with Twinkle Khanna on the sets of International Khiladi , it was the beginning of journey of their love life. There after the couple did one more film Zulmi and both the films were commercially successful. After knowing each other for few years the couple decided to stick together forever!! Although he dated many Bollywood actress he found his life beautiful with Twinkle Khanna. There were some Chup chup things even during the preparation, they were engaged twice before tying knot on 14th January 2001. Twinkle Khanna finished her pending films before saying good bye to her short lived film career, she decided to focus on her family and children more. The couple are blessed with a son Aarav Bhatia born on 15th Sep 2002 and a daughter Nitara Khanna Bhatia born on 25th Sep 2012. 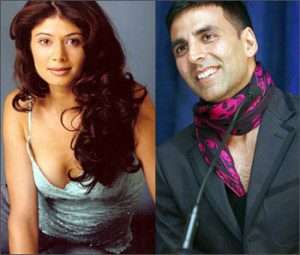 Akshay Kumar & Pooja Batra: Pooja was the first girl whom Akshay took seriously in his Bollywood career. She was a successful model and actress. She helped him a lot during the beginning of his filmy career, after few years of hard work and people’s love he reached the top of industry. The couple broke up after few years of relationship. 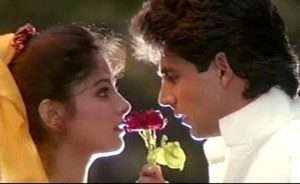 Akshay Kumar & Ayesha Jhulka: After breaking up with Pooja he started to date Ayesha Jhulka. Together they appeared in super hit film Khiladi. 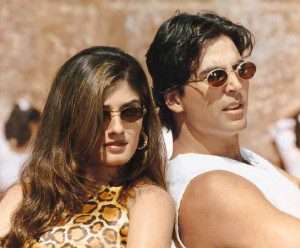 Akshay Kumar & Raveena Tandon: This is the most talked about relationship in Bollywood. Their on screen chemistry was so strong that people actually wanted them to be together forever. The couple met on the sets of film Mohra in 1994 and started dating seriously. The gossips went to the extent of saying that they secretly wedded after Mohra. After three years of relationship the couple broke up. After few months Raveena admitted in her interview that they were secretly engaged in a Mandir. She stated that loyalty meant everything to her and couldn’t forgive him any more. 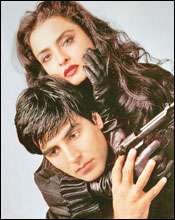 Akshay Kumar & Rekha: It was during the filming of Khiladiyon Ka Khiladi Rekha started seeing Akshay. But none of them accepted their relationship and just rumours floated all around. It was even reported that Raveena spoke to Rekha to clear the air. 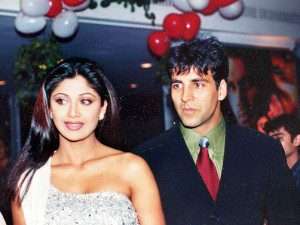 Akshay Kumar & Shilpa Shetty: The couple met each other on the sets of Khiladiyon Ka Khiladi and dated for few years. Twinkle Khanna and Shilpa Shetty are still good friends. 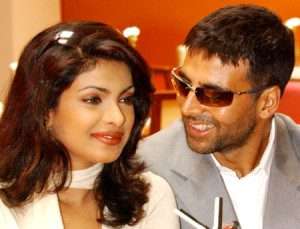 Akshay Kumar & Priyanka Chopra: Akshay once known for his gossips with his co-stars was once again in news for his alleged affair with Priyanka Chopra in 2007. The couple worked together for Andaaz, Mujhse Shaadi Karogi, Aitraaz & Waqt. Both of them didn’t comment on their relationship, many tabloinds published the pictures their social gatherings. And apparently everything seems fine with Akshay Kumar and Twinkle, say cheers!!