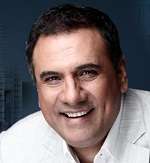 Boman Irani was born into an Irani family on 2nd December 1959 in Mumbai, Maharashtra state. He attended St. Mary’s School and Mithibai College, in Mumbai. After completion of his polytechnic diploma course he started his career as a waiter in Taj Mahal Palace & Tower in Mumbai. Subsequently he worked for his ancestral bakery shop near Apsara Cinema in South Mumbai. He later took photography as career and worked as a photographer until his film career took break.

Boman Irani is married to Zenobia and the couple have two sons named Danesh, who is married to Reah Cama and Kayoze Irani. His second son Kayoze Irani is also an actor and made his film debut with blockbuster hit Student Of The Year.