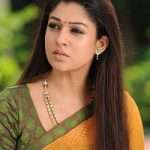 South Indian actress Nayantara was born on 18th November 1984 in Bangalore city, Karnataka. Her birth name is Diana Mariam Kurian but she prefers to use Nayantara as her screen name. Since her father was serving Indian air force she had to study in various cities like Chennai, Jamnagar, Delhi etc. After retirement her family settled in Kerala, there she attended Kendriya Vidyalaya schools, Balikamadom Girls Higher Secondary School and Marthoma College. She holds degree in English Literature.

She started her modeling career when she was in college only, she worked for local commercial for some time. Director Sathyan Anthikkad offered Nayantara lead role in Manassinakkare in 2003, interestingly she denied the offer initially but on persistent efforts she agreed to do only one film, after the release the film became blockbuster hit of the year and she became star overnight. After few more Malayalam films she made her Tamil debut with Ayya in 2005 co-starring Sarath Kumar, Prakash Raj, Napoleon and Vadivelu. Her next work  Chandramukhi in 2005 co-starring Rajinikanth, Jyothika and Prabhu became blockbuster hit running over 800 days. She later appeared in several commercial hits like Ghajini with Suriya and Asin, her Telugu debut Lakshmi co-starring Venkatesh and Charmme Kaur, Billa co-starring Ajith Kumar, Prabhu and Namitha, Yaaradi Nee Mohini co-starring Dhanush and Karthik Kumar, Boss Engira Bhaskaran co-starring Arya and Santhanam, Raja Rani co-starring Arya and Jai.

She developed interest in Hinduism and officially converted to Hinduism on 7 August 2011 after performing Vedic purification procedures, her screen name Nayanatara became her official name from then. She later visited Hindu holy places like Haridwar, Rishikesh etc.

She has an elder brother named Leno, he is nine years older than her and currently settled in Dubai.