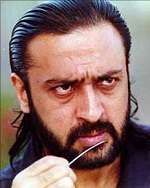 Gulshan Grover was born into Punjabi family on 21th September 1955 in New Delhi. He attended Government school in Trinagar and during his childhood days he used to take part in school plays. After his school hours he was helping his father with family business. He is a commerce degree holder from Delhi’s Sri Ram College of Commerce. He started his career working in ‘Little Theatre Group’ for some time before making debut in Bollywood.

He decided to take films seriously and moved to Mumbai to join Roshan Taneja’s acting school, where he studied along with Anil Kapoor, Sanjay Dutt and Mazhar Khan. Eventually Gulshan Grover became teacher at the same acting school where he taught today’s leading actors.

He made his acting debut in 1980 with Hum Paanch. During his decades long film career he appeared in more than 400 films including few Hollywood films. He appeared in numerous commercially successful films like Yaariyan co-starring Himansh Kohli, Rakul Preet Singh, Nicole Faria and Shreyas Porus, I Am Kalam co-starring Harsh Mayar, Pitobash Tripathy and Beatrice Ordeix, Virsa co-starring Arya Babbar, Mehreen Raheel, Kanwaljit Singh and Noman Ijaz, among other films.

He was born to Karan Singh Grover and Ramrakhi Grover. His family migrated from Rawalpindi to Delhi where his father was carrying family business.

He was married to Filomina Grover from 1998–2001. The couple gave birth to a son named Sanjay Grover. After the divorce the custody of child was given to Gulshan Grover on his request. He was later married to Kashish Grover in 2001 but their marriage was ended very soon in 2002.