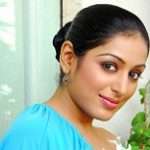 Actress Padmapriya Janakiraman was born into a Tamil family on 28th February 1980 in Delhi. She attended Kendriya Vidyalaya in Trimulgherry, Loyola Academy in Alwal and Kirloskar Institute of Advanced Management Studies in Harihar. She is a well trained bharatanatyam dancer and her dance performance ‘Krishna Leela’ was aired on Doordharshan several times.

While in college she appeared in a music album and later in 2001 she won Miss Andhra Pradesh in 2001. After completion of her MBA degree she worked for GE Capital in Bangalore. During this time she did few modeling ventures and from there she landed in films. Padmapriya made her movie debut with Telugu movie Seenu Vasanthi Lakshmi in 2004. She entered Malayalam films with Kaazhcha opposite Mammootty in 2004 itself and the movie was a huge success.

She has a brother named Prabhakar Janakiraman.