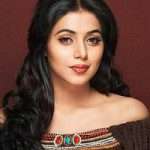 Shamna Kasim was 24th May 1989 into a Muslim family in Kannur, Kerala state, India. She holds Bachelor’s degree in English literature. She is a well trained classical dancer and gained recognition after taking part in dance competition Super Dancer aired on Amrita TV.

She was born to Kassim and Ramla Beevi.