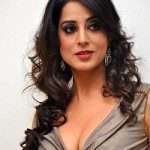 Mahi Gill was born on 19th December 1975 in Chandigarh, Punjab state. Her birth name is Rimpy Kaur Gill and sometimes credited as Mahie Gill in films. She did her Masters in theater from Punjab University in 1998. Her Bollywood debut was Hawayein co-starring Babbu Mann and Sunny Mann in 2003. She subsequently did few Punjabi films.

Her father passed away in 1998 and her mother played key role in molding Mahi Gill’s personality.

Mahie Gill was married to a businessman and divorced him due to differences.