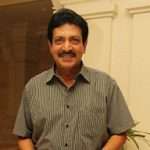 Nizhalgal Ravi is married to Vishnupriya and the couple gave birth to a son named Rahul.