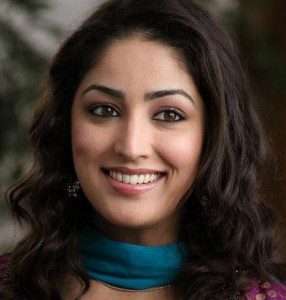 *    After completion of her formal education she moved to Mumbai and pursued her acting career.

*    Yami Gautam made her TV debut with Hindi daily soap Chand Ke Paar Chalo which was aired on NDTV Imagine, her career

*    took a big break when she appeared in “Yeh Pyar Na Hoga Kam” on Colors.

*    Her film debut was with Ullasa Utsaha in Kannada alongside Golden star Ganesh.

*    Her Bollywood debut was with “Vicky Donor” in 2012 alongside Ayushmann Khurrana and Annu Kapoor, though the film was low budget it was a big commercial hit and received positive reviews.

*    She appeared on the cover page of Prevention and Femina magazines in 2012.

“My Parents Were Completely Okay With My Lovemaking Scenes. I Don’t Have To Justify Anything To Anyone”

“I am an introvert by nature. I am somebody who couldn’t even recite a poem in front of my mother. But when it comes to being professional, I am a completely different person.”

“As a child I wanted to be an actor, but soon I turned studious and somewhere down the line I had nothing to do with films. While in school, one of my teachers wanted me to act in a play but being such an introvert, I almost didn’t do it; she somehow managed to convince me to play the part and, much to our surprise, our play won!”

“I stopped doing television. I don’t think I would ever go back to the small screen. I have moved on. I really respect television since I owe my financial security to it. But as of now, I am keen on movies, and nothing else.”

“Sperm donation is a social cause, it doesn’t save life, it gives life. Life is so stressful that it has it’s adverse effects biologically, this one tackles the issue in a very mature way but in a very light-hearted manner. Vicky Donor is not just comedy, it has a good story with a right package that has not been dealt in Hollywood as well.”

“I didn’t approach anybody for the audition, I didn’t go to anybody’s office. It just happened. But after that you have to take your own leap. You have to put in your own hard work. And destiny also supports those who support themselves.”