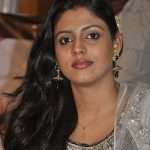 Actress Iniya was born on 21st January 1988 in Thiruvananthapuram, Kerala State. Her birth name is Shruti Sawant. She did her schooling at Amritha Vidyalaya and Manakkad Karthika Thirunnal High School. She subsequently completed her bachelor’s degree in business administration through distance course education.

Iniya started her career as a child artist in TV series and short films. As a child artist she appeared in many telefilms such as Koottilekku, Orma, Sree Guruvayoorappan etc. While in college she won Miss Trivum title in 2005. She gained popularity after winning the beauty pageant and worked for numerous modeling assignments.

She was born to S.Salahuddin and Savithri.

She has an elder sister named Swathi, an actress.

She has a younger brother named Sravan.