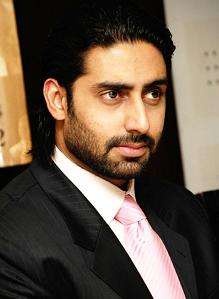 *    Abhishek has an elder sister Shweta Bachchan Nanda born in 1974.

*    Well known Hindi poet Harivansh Rai Bachchan is his grandfather and he used Bachchan was his pen but later it struck with the family as surname though the original surname is Shrivastava.

*    During his childhood days he was suffering from Dyslexia, a learning disability.

*    After completion of his formal education Abhishek started to show interest for films and made his acting debut with “Refugee” in 2000 opposite Kareena Kapoor, the film did moderately well at box office and he won Filmfare Best Male Debut award for his role in the movie.

*    In after his debut Abhishek delivered several flops in a row, his second blockbuster came in 2004 with “Dhoom” alongside John Abraham and Uday Chopra. the film went on to be the biggest hit of the year. His subsequent film Bunty Aur Babli alongside Rani Mukerji was also a hit in 2005, Sarkar alongside Amitabh Bachchan did well at box office, Dus alongside Sanjay Dutt, Zayed Khan and Sunil Shetty did well, Rohan Sippy’s Bluffmaster opposite Priyanka Chopra was a hit.

*    He delivered several hits like Kabhi Alvida Naa Kehna in 2006 which became the biggest blockbuster of the year, Dhoom 2 alongside Hrithik Roshan and Uday Chopra did well, Guru in 2007 was a commercial success, Sarkar Raj in 2008 alongside Amitabh Bachchan and Aishwarya Rai was a hit, Dostana with John Abraham and Priyanka Chopra, Bol Bachchan in 2012 alongside Ajay Devgan and Asin Thottumkal.

*    Abhishek and Karisma Kapoor announced their engagement in 2002 on Amitabh Bachchan’s 60th birthday but in January 2003 due to some reasons the engagement was called off.

*    Abhishek Bachchan was later engaged to Aishwarya Rai in Jan 2007, the marriage took place on 20 April 2007 in a private ceremony at Prateeksha, Mumbai. The couple are blessed with a baby girl born on 16th Nov 2011 and they named her “Aaradhya Bachchan” in March 2012.

“I couldn’t dream of a different life and I wouldn’t want a different life. Unfortunately a lot of people try and portray who I am, the kind of family I come from and try and make it out to be a huge burden, it’s really not.”

“If a man tries to restrain his wife, then there must be two reasons for it. Firstly, he’s insecure. Secondly, he doesn’t trust her. I am a secure person and have complete faith in my wife.”