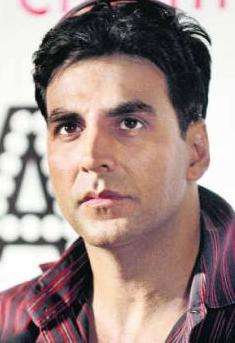 *    His birth name is Rajiv Hari Om Bhatia, he started using Akshay Kumar as his screen name due to astrological reasons.

*    Akshay Kumar’s father was serving the Indian army when he was born, his mother Aruna Bhatia was a house wife.

*    After completion of his education Akshay developed interest in martial arts and after few years of training he earned black belt in Taekwondo, later he went to Thailand to learn Muay Thai and there he did several odd jobs like chef, waiter etc for livelihood.

*    After learning Muay Thai in Thailand Akshay returned to India with an intention of opening martial arts school and he actually did so, but during this period one of his students who was a photographer recommended him to do modeling. His student was even able to get him an assignment and for two hours of photo shoot Akshay got Rs. 5,000/- whereas his monthly salary was Rs. 4,000/-. Akshay Kumar still believes this incident to be the turning point of his life otherwise he would have stayed in the martial arts school forever.

*    With huge commercial hits in 1990s he became one among the prominent actors in Bollywood,in 2000 decade he delivered hits like Hera Pheri in 2000, Dhadkan in 2000 alongside Shilpa Shetty and Sunil Shetty, Khiladi 420 in 2000 opposite Mahima Chaudhry, Aankhen in 2002 alongside Amitabh Bachchan and Sushmita Sen, Awara Paagal Deewana in 2002, Mujhse Shaadi Karogi in 2004, Garam Masala in 2005, Waqt in 2005, Phir Hera Pheri in 2006, Namastey London in 2007 with Rishi Kapoor and Katrina Kaif, in 2007 Heyy Babyy, Bhool Bhulaiyaa and Welcome, Singh Is Kinng in 2008 opposite Katrina Kaif, in 2009 Kambakkht Ishq, Blue and De Dana Dan,

*    In 2010 decade he appeared in several hits including Housefull in 2010 with Deepika Padukone and Arjun Rampal, Tees Maar Khan opposite Katrina Kaif, Rowdy Rathore in 2012 opposite Sonakshi Sinha etc.

*    Akshay Kumar is known for his mind blowing stunts without dupes, his most noted movie stunt in Khiladi 420 wherein “he climbed a running plane, stood on top of the plane flying a thousand feet in the air, and jumped from the plane onto a hot air balloon”. Due to his martial arts expertise he prefers to do his action scenes instead of using dupes.

*    He was honored with several national and international awards for his contribution to film industry, including Rajiv Gandhi Award, Padma Shri, Japanese honour of “Katana” and “University of Windsor”, Canada honored him with Honorary Doctorate in 2008.

“I have always tried to speak in Hindi. It is because in real life I am a real ‘desi’ boy. All my life I have believed that the day should start with touching the feet of my parents, that home cooked food is always better than outside food. I have always preferred ghar ka parantha to anything from outside.”

“Youth is a lifestyle; it’s not a blessing from God. If we treat our bodies as if they are not the most precious things we possess, then obviously we will show wear and tear. We’re like a good pair of jeans. If we take care of them, they’ll remain classic forever, but if we batter and abuse them they’ll look like tattered old rags.”

“I would play cricket in the bylanes of Delhi where I grew up as a kid. I always looked up to cricket personalities like Vivian Richards, Sunil Gavaskar, Imran Khan and always enjoyed their on-pitch performances.”

“Work hard and believe in yourself and God and things will just fall into place.”

“I always wanted to be an actor. I am lucky to have been able to convert some of my dreams to reality. It was difficult. After doing my stint in Bangkok, I did several things before getting a break as a model.”

“There are some people who like to sit on all the rides in an amusement park, no matter how scary because it is fun. I am like that. I enjoy it. Also, in the park, you have to pay to get that kind of a thrill, but in films, they pay me to do experience those kinds of thrills. Whether it is underwater scenes or leaping from planes or buildings.”