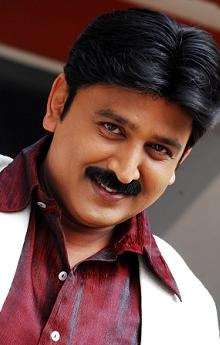 * Ramesh Aravind was born on 10th Sep 1964 in Bangalore, Karnataka.

* He is married to Archana Ramesh and the couple have a daughter Niharika and a son Arjun.

* He made his film debut with “Sundara Swapnagalu”, the movie was directed by K. Balachander.

* After gaining much success in Kannada films he also worked for many other Indian language films including Tamil, Telugu, Malayalam and Hindi.

* During 1990’s he was able to create records in Kannada film industry, it was his high point of his career. He delivered superhits like America America, Ulta Palta, Amrutha Varshini etc. In each film he proved himself to be a versatile actor having no boundary.

* He wrote script for national award winning Kannada film “Hoomale” in 1998 and it was his first step towards film direction. He also won “Filmfare Award Best Actor” for his performance in “Hoomale”.

* He made his directorial debut with “Rama Shama Bhama” alongside Kamal Haasan,Shruthi, Daisy Bopanna and Urvashi, the film was a huge commercial hit and he won ‘Udaya Best Director Debut’ award for his work in 2006. His subsequent directorial venture “Sathyavaan Savithri” also did well at box office.

“I respect the audience response. They prefer me to see in the film like Amrutha Varshini, America America and Thutta Mutta. I will continue to do go films in future also.”
“It is a tough task to excite the younger generation today. They are exposed to so many variety of entertainment in small screen. From one frame they decide. They want the Truth happening around them and that connects them very well is the need of the hour. They do not like persons like me dancing. They have seen Hrithik Roshan dancing in an exhilarating style.”

“I always believe that cinema is a team effort like a cricket match. Everyone from artistes to technicians is responsible for the success.”

“Though I have done more comedy films, I have tried out all genres. I have done many roles, in which I sacrifice my love interest towards the end and I’m bored of such roles now.”
Related posts: Ramesh Aravind family, childhood photos