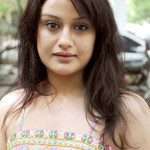 *  Agarwal made her movie debut with Telugu movie ‘Nee Premakai’ in 2002, in the same year she made kannada debut with Chandu alongside Sudeep. Her Tamil debut was with blockbuster Kaadhal Kondein opposite Dhanush for which she won ITFA Best New Actress Award. Her next venture with Selvaraghavan in 7G Rainbow Colony was also a huge hit.

*    She married noted film director Selvaraghavan in December 2006, after two years of marriage life the couple filed divorce petition 9 Aug 2009 in Chennai family court and the divorce was finalised on March 12, 2010

*    After the marriage Sonia Agarwal stopped acting in films and after the divorce she re-entered the films with Vaanam in 2011.

“My role model is Madhuri Dixit. In tamil I like Jothika, Meena and Simran.”

“I am a fan of Vijay. Other heroes whom I like are Simbhu and Srikanth.”

“I am more disciplined now. When I made the decision to re-enter films, I went on a diet. I also started training under a personal trainer and made it a point to work-out for two hours a day. I’m more on a protein diet these days and I also stay away from late night parties.”