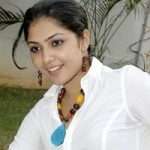 Kamalini Mukherjee was born on 4th March 1980 in Kolkata, West Bengal State. During her school days itself she used to participate in school plays. She is also interested in painting and poetry. Even before her acting career she wrote 3 poems which were published on poetry.com. She was invited to Washington for attending International Poetry Contest presided by Dalai Lama.

She attended Loreto College in Kolkata and has a Bachelors degree in English literature. After her graduation she studied hotel management but lost interest in the course to pursue acting career. She attended a workshop on theatre in Mumbai for some time to learn acting professionally. She is also well trained in Bharatanatyam dance. She started her acting career appearing in local theater plays. She did several commercials for reputed brands like Parachute hair oil, Fair & Lovely cream, Neelkamal chairs etc.

Her father is a marine engineer and her mother is a jewellery designer.

She has two younger sisters.