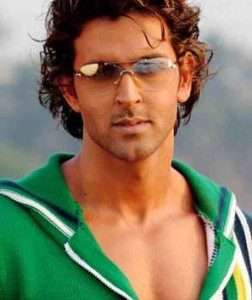 *   Bollywood film director Rakesh Roshan is his father and his mother Pinky is the daughter noted film producer J. Om Prakash, hence it was a piece of cake for him to enter films but its his hard work which saved his career.

*    Sunaina is the elder sister of Hrithik.

*    Hrithik attended “Bombay Scottish School” and “Sydenham College”. He has a degree in Commerce.

*    His school days were very tough due to his stammering and he suffered psychologically for a long time. He took speech therapies to overcome the problem.

*    Hrithik has two thumbs on his right hand but its hidden in all of his films except Koi… Mil Gaya.

*    Hrithik is also a singer and sung for films like ‘Kites’, ‘Zindagi Na Milegi Dobara’ & ‘Guzaarish’.

*    His life-size wax statue was installed in 2011 at “London’s Madame Tussauds Wax Museum’ and he is the fifth Indian actor to get such honor.

*    Hrithik made his adult debut with blockbuster “Kaho Naa… Pyaar Hai” alongside Amisha Patel, the film was also debut for her in 2000. The film became biggest blockbuster of the year and he won “Filmfare Best Male Debut Award” & “Filmfare Best Actor Award” for his performance in the film. “Kaho Naa… Pyaar Hai” entered Limca Book of Records for winning most number of awards i.e. 102 awards.

*    In 2010 decade he appeared in several blockbusters like ‘Guzaarish’ in 2010 with Aishwarya Rai for which he won several nominations, ‘Zindagi Na Milegi Dobara’ in 2011 alongside Abhay Deol, Katrina Kaif, Farhan Akhtar and Kalki Koechlin, ‘Agneepath’ in 2012 alongside Sanjay Dutt, Rishi Kapoor and Priyanka Chopra.

“I was 6-year-old when I discovered that I have started to stammer. I was teased a lot for stammering. I use to feel like one of those handicaps, on whom people laughed, but I cannot blame them, as it was funny. I remember during my oral test exams, I use to bunk by giving reasons such as stomach ache or fever, as it was quite horrifying. My childhood days can be termed as hell.”

“I’ve never felt more alive. I’m evolving with each step. People don’t grow old. When they stop growing they become old. I never want to get there. You just have to keep evolving.”

“Shah Rukh Khan will always be a friend, an elder brother whom I’ll look up to. He’s seen me grow up. I was my dad’s assistant during Karan Arjun and Koyla. So there’s no question of any feeling of rivalry between us. I know for sure he likes me.”

“The true freedom and flight of an actor can only happen when he can break through that cage of physicality. At some point all of us have to stop trying to look good all the time. This vanity keeps every actor chained down. I’m trying to go beyond that. It isn’t easy to go beyond your physicality.”

“There is definitely a supreme guiding force that takes charge of each one of us at the end of the day. There is destiny. My belief is reinstated after the success of my debut film KNPH. Who thought that I would be a star with my first film. That’s fate. But I do believe that fate does not mean that you wait for success and do no karma. You must do your best and fate will hold in store for you exactly what you deserve.”