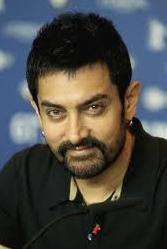 Aamir Khan as a child artist

Aamir Khan as a Lead

*   His birth name is Aamir Hussain Khan but for his movies credit he just uses Aamir Khan in short.

*   Since his father and uncle was already in the show business it was easy for Aamir to enter the films. He made his acting debut with Yaadon Ki Baaraat in 1973 alongside Dharmendra when he was just 8 years old, he later worked for Madhosh in 1974.

*   Aamir Khan made his debut as an adult in 1984 with Holi alongside Om Puri and Naseeruddin Shah but the film was a commercial failure and went unnoticed.

*   Aamir Khan’s first blockbuster was ‘Qayamat Se Qayamat Tak’ in 1988 alongside Juhi Chawla, the film was directed by Mansoor Khan. Aamir even won Filmfare Best Male Debut award for his performance in the movie. His very next movie Raakh was also a hit and Amir khan got nominated for Filmfare Best Actor Award for his role.

*   Aamir subsequently delivered many blockbusters like Dil in 1990 opposite Madhuri Dixit, Dil Hai Ke Manta Nahin in 1991 opposite Pooja Bhatt, Jo Jeeta Wohi Sikandar in 1992 alongside Ayesha Jhulka, Hum Hain Rahi Pyar Ke in 1993 opposite Juhi Chawla, Rangeela in 1995 alongside Jackie Shroff and Urmila Matondkar, Raja Hindustani in 1996 alongside Karisma Kapoor, Ishq in 1997 alongside Ajay Devgn, Juhi Chawla and Kajol, Ghulam in 1998 opposite Rani Mukerji, Sarfarosh in 1999 opposite Sonali Bendre.

*   In 2000 decade he gained prominence with major hits like Lagaan in 2001 opposite Gracy Singh won “Best Foreign Language Film” at the 74th Academy Awards and in India also it won numerous awards including the National Award, Aamir won “Filmfare Best Actor Award” for Lagaan. Dil Chahta Hai in 2001 alongside Saif Ali Khan, Akshaye Khanna and Preity Zinta, Rang De Basanti in 2006 alongside Siddharth Narayan and Sharman Joshi, Fanaa in 2006 opposite Kajol, Taare Zameen Par in 2007, Ghajini in 2008 opposite Asin, 3 Idiots in 2009 alongside Kareena Kapoor, R. Madhavan and Sharman Joshi.

*   Apart from acting Aamir is involved in film production also, he established his own production company “Aamir Khan Productions” in 2001 and its first film was Lagaan which turned out to be the biggest hit of the year. He later produced films like ‘Madness In The Desert’, ‘Taare Zameen Par’, ‘Jaane Tu… Ya Jaane Na’, ‘Peepli Live’, ‘Dhobi Ghat’, ‘Delhi Belly’ and ‘Talaash’

*   Aamir raised his voice in many social causes also, he supported “Narmada Bachao Andolan”, “Janlokpal Bill Movement”of Anna Hazare, he started to host TV show “Satyamev Jayate” in 2012 which became a had great response from all over the world since it had issues like child sexual abuse, female foeticide, dowry etc.

*   Aamir Khan married his Qayamat Se Qayamat Tak co-star Reena Dutta on 18th April 1986, the couple have a son, Junaid & a daughter, Ira. In 2002 Aamir filed a divorce petition against Reena Dutta and the couple ended their 15 years relationship officially in 2002, Reena took custody of children.

*   Aamir Khan married Kiran Rao on 28th Dec 2005, Kiran Rao worked as an assistant to Ashutosh Gowariker during the making of Lagaan the couple have a son Azad Rao Khan born on 5th Dec 2011 through a surrogate mother.

*   Aamir Khan is known for his indifference to film awards, though nominated several times he didn’t attend the award functions including Filmfare Awards and Dadasaheb Phalke Academy Awards.

“I’ll continue with direction. Ideally if I am directing I won’t get into acting. I concentrate to put my efforts on one task at a time, I am not a man of multitasking, I enjoy the way I work and follow each step carefully after my past.”

“My biggest achievement is the love and respect that I have got from people. It is very difficult to achieve that. My family, who is very near to me, is also my achievement.”

“I don’t see myself as a saviour. I see myself as someone who is just trying to learn and this is a personal journey for me. A journey for enriching my own life and in the process of that, understanding my country better and the issues facing us together and the issues affecting our society. In the process of learning about those things I’m hoping to share that with people.”