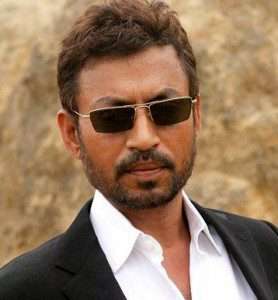 *    His father was running a tyre business in Tonk district.

*    His mother, Begum is from Hakim family.

*    After completion of his training at National School of Drama he moved to Mumbai and started to work for several TV serials like Chanakya, Sara Jahan Hamara, Bharat Ek Khoj etc.

*    Irrfan made his Bollywood debut with Salaam Bombay in 1988 in a small role.

*    During Irrfan’s decades long career he worked for numerous successfull films like The Warrior in 2001 directed by Asif Kapadia, Life in a… Metro in 2007 alongside Dharmendra, Shilpa Shetty, Nafisa Ali and Kay Kay Menon, The Namesake in 2007 opposite Tabu and Kal Penn, Hollywood film The Darjeeling Limited in 2007 alongside Adrien Brody and Owen Wilson, Slumdog Millionaire in 2008 alongside Anil Kapoor, Dev Patel, Madhur Mittal and Freida Pinto, Acid Factory in 2009 with Fardeen Khan, Dino Morea and Manoj Bajpai, New York in 2009 opposite John Abraham, Katrina Kaif and Neil Mukesh, Paan Singh Tomar in 2010 alongside Vipin Sharma and Mahi Gill, The Amazing Spider-Man in 2012 alongside Andrew Garfield, Rhys Ifans and Emma Stone, Life of Pi in 2012 opposite Suraj Sharma and Tabu.

“I love my life in India and I keep coming here to America for work. I was born in India so India is in my blood. What I like about India is its informality. I still remember when I was a child growing up in my parents’ house, that people would often come over to see us without even telling us beforehand. They don’t call, they don’t say ‘we are coming over,’ they just arrive. We never ask ‘why have you come?’ They don’t need a reason to visit.”

“I am choosy because it’s not my face that sells. My work is what people like and want to see again and again; so I can’t repeat myself. I have to look at the stories, which are exciting, which give me scope to do what I haven’t done earlier, which have entertainment, which can engage me for a long period of shooting. So it also becomes important to see with whom you are going to work.”

“I would like to believe that I have a sense of humour as a person. So naturally, some of it translates onto the screen. When I go to a set, I respond to a situation like any actor would. Maybe you would like to slot me as a comic or a serious actor, but I don’t want to slot myself.”

“Drinking’s not a gentleman’s game for me – you know, two pegs every evening. If I start drinking, I drink till I drop dead. So generally I don’t drink, because the next day I don’t like my body, I hate myself. When I was younger I could keep drinking all night and it wouldn’t hit me that hard.”